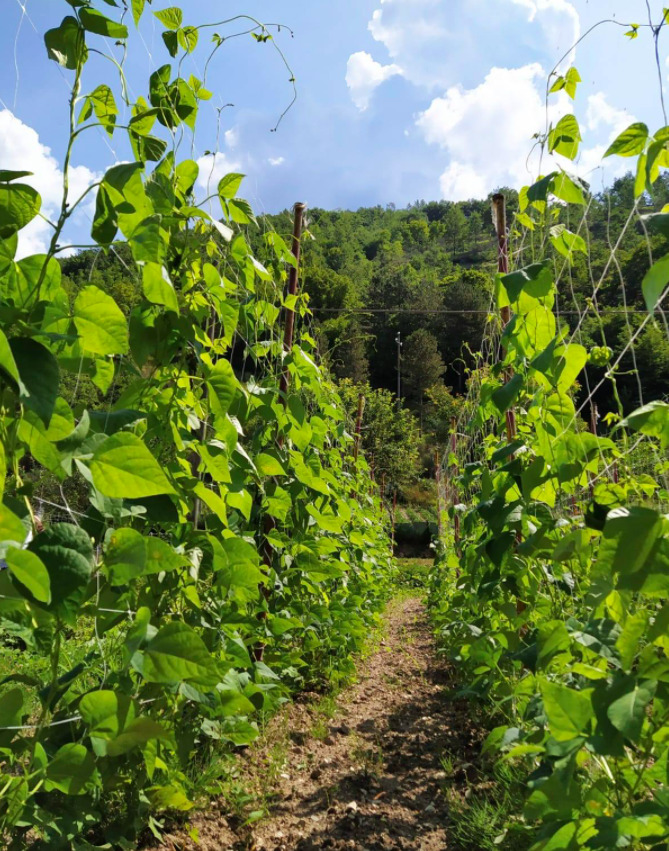 Laverino is a small town of just one hundred inhabitants set in the Marche mountains near the border with Umbria, on the Cornello pass. Right here, in the fertile soils lapped by the Potenza River, this bean arrived in the Marche region and found its ideal habitat in the 16th century thanks to the Spanish and Portuguese, like all the other varieties of Phaseolus vulgaris.

The seed is white, medium-small in size, slightly elongated and the plant can reach up to two or three meters in height.

The delicate taste and the very thin peel, which allows its rapid cooking, are its most appreciated characteristics.

The bean’s fame dates back as far as the early 1800s, when the Annals of Agriculture of the Kingdom of Italy talked about the fertile lands of this area, with the author writing, “They give quantities of beans whose delicacy, flavor, sweetness and ease of cooking are superior to those from all the surrounding towns.”

Laverino beans are grown at around 600 meters above sea level, in fields known as canapine, because they were once used to grow canapa, hemp. The plots are marked out by small channels that run at right angles to the river. The beans are sown after May 18 (Saint Venantius’s Day) at regular distances, with four or five seeds per hole.

The indeterminately growing plant must be supported, and traditionally was trained up a branch from the manna ash tree.

The beans ripen in September, and seeds from the first harvest would be selected and set aside for planting next season. As the plant grows, the only necessary work is weed control, carried out manually, and hoeing. Thanks to the quality of the soil, irrigation is not necessary. The beans are usually rotated with potatoes and green manuring helps reduce the presence of weeds.

After the harvest, the pods are left to dry in the sun, then the beans are shelled and left in wicker baskets out in the sun for a few more days until completely dry.

Laverino beans are used in several traditional local dishes. The cooking style that shows them off best is all’uccelletto, with garlic, sage and pepper, but they are also excellent stewed with pork from the belted pig breed typical of the area.

Over the course of the years production of this legume has risen and fallen, closely linked to demographic trends in the area. The abandonment of the countryside has hit hard here; vineyards and pasture used to cover the hills that are now blanketed with woods.

The task of reviving and promoting this legume began in 2004, when a study of the historic and agronomical aspects of the variety was carried out and the Laverino Bean Festival was launched, held every year in early November. The 2016 earthquake reached Laverino, bringing the local economy to a standstill and somewhat slowing the bean’s revival.

The Presidium has been started thanks the work of local Slow Food convivia and the contribution of the Parmigiano Reggiano Consortium, which supports several agricultural revival projects in the earthquake-stricken areas of central Italy. The Presidium’s aim is to provide technical support to young farmers so that they can continue cultivating this variety and recovering abandoned agricultural land, but also to promote other local products like pecorino cheeses and cured meats.

Do you know any other businesses we haven’t mentioned?
Contact us at info@cuoredimarche.it