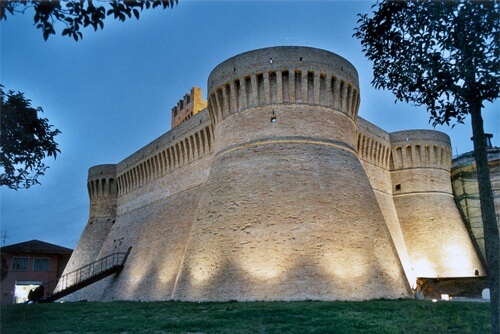 You are crossing the territory of Urbisaglia: different eras, one history. Over two thousand years of history have left signs and valuable monuments among these gentle hills in a unique historical and cultural heritage. Halfway between the Sibillini Mountains and the Adriatic Sea, immersed in a green and harmonious landscape, Urbisaglia invites you to moments […] 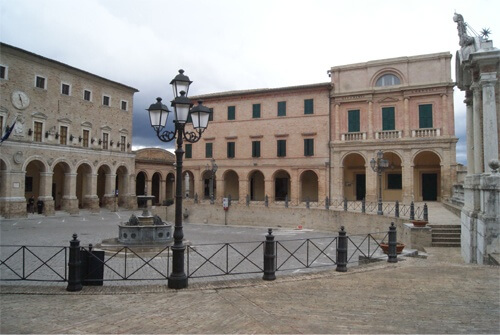 Crossing Treia The city has an ancient and fascinating history: archaeological findings, medieval towers, Renaissance palaces and neoclassical façades, all a succession of large and small works of art created by the many geniuses who were born or lived in Treia. Surrounded by a breathtaking landscape and an uncontaminated and blooming nature, Treia rises at […]

Tolentino: an enchanting place where get lost cuddled in a unique hospitality Inhabited since the Mesolithic period, the city has Picene and Roman origins. Elevated to the rank of City in 1585, Tolentino has witnessed two important historical events linked to Napoleon: the Peace Treaty of 1797 and the Battle of Tolentino in 1815. It […] 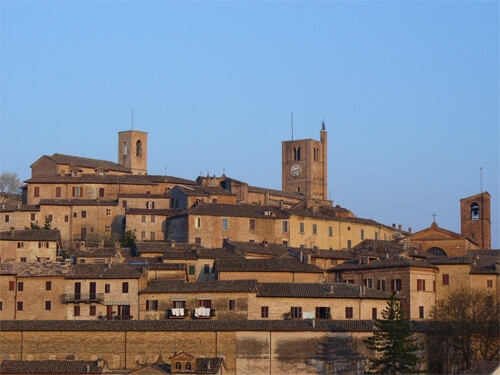 Sarnano, more than you could imagine This wonderful medieval village is nestled on a hill. Its highest point sees the church of S. Maria di Piazza Alta (XII-XIV century) overlooking the landscape. The Town Hall hosts the Municipal Library with its ancient illuminated manuscripts. At the museum complex it is possible to visit the area […]

Between history, art and nature San Severino Marche is one of the most evocative cities of the Marche, a treasure chest of art, heir of a thousand-year history. Dominated by the village of Castello del Monte, it has the beating heart in Piazza del Popolo, one of the most beautiful of the Marche. The hilly […]

You are crossing the territory of Pollenza The history of Pollenza has its roots in the age of piceni. Called Monte Milone until 1862, Pollenza is a charming town located on a hill 344 meters above sea level, between the valleys of Chienti and Potenza. The urban layout, of Roman origin, develops around a historic […]

You are crossing the territory of Petriolo Nestled at an altitude of 271 m. between the Fiastra Valley and the Cremone Valley, Petriolo has an enchanting position, whose view sweeps from the Sibillini Mountains to the Adriatic Sea. It dates back to 957 A.D., where a fundo Peturiolo appears for the first time in a […] 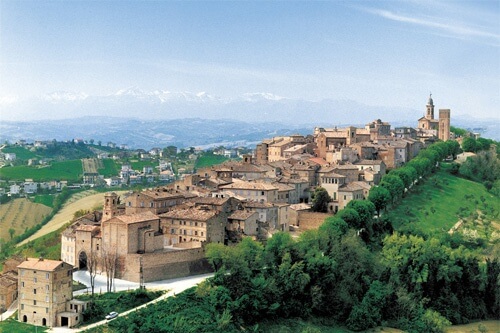 Discover Mogliano Mogliano rises on the ridgeline between the valleys of Cremone and Ete Morto, surrounded by olive groves of the variety Piantone of Mogliano. The town is renowned for crafts. The fortress built by Fildesmido da Mogliano in the thirteenth century dominates the valley. Along the main street there are valuable monuments: the Church […] 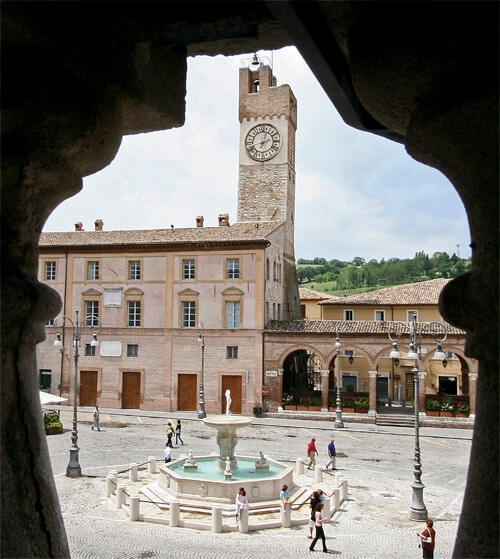 A journey through the enchantment of places, colors and flavors Matelica rises in the Esino Valley. An ancient Picenum settlement, it was a Roman municipality, of which signs are still visible, such as the very rare spherical sundial over 2,000 years old. Heart of the city is Piazza E. Mattei, and the fountain of 1587, […] 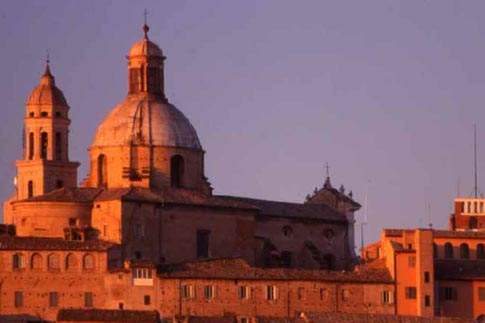 Macerata by Bike Macerata is a vibrant city as it is home to one of the oldest universities in the world and, at the same time, it is a city which preserves a traditional and genuine lifestyle thanks to its wide natural landscape that extends from the gentle hills to the sea and the mountains. […]

You are crossing the territory of Fabriano In the heart of Marche, at the foot of the Apennines, Fabriano is among the widest municipalities of Italy. Surrounded by verdant landscapes, Fabriano is a cultural crossroads of ancient origins and traditions. Fabriano is universally recognized as the “city of paper”. Due to its creativity, since 2013 […] 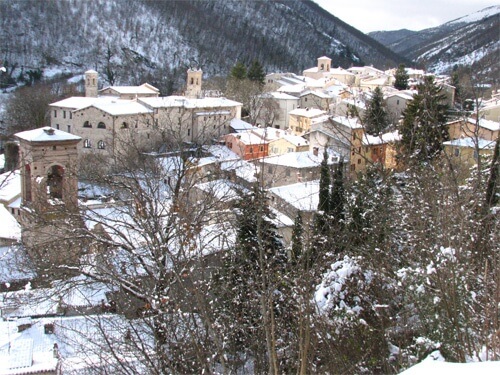 A gem set between water, history and nature The burg lays on a hillside and is enclosed by robust castle walls. Streaming from the slopes of Mt. Cafaggio, River Esino glides below. Discover Esanatoglia’s surprising features and picturesque views, among medieval architecture and cobblestone alleys. You may visit the sevenfold towered old burg along the […] 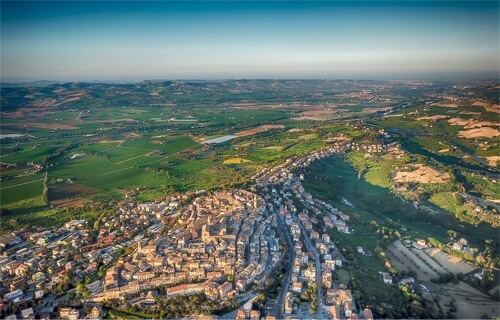 You are crossing the territory of Corridonia Coming from a farming tradition, it has recently seen the development of a flourishing industrial activity, distinguishing in footwear, furniture and construction. In the Middle Ages it was known as Montolmo because of the presence of a gigantic, centuries-old elm tree. The current name was given in 1931 […] 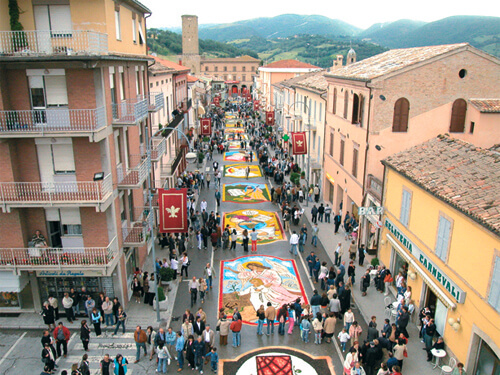 A journey into the wonder of history and traditions, between petals and flavors The original settlement is known to go back to antiquity but was first recorded in 1290. There is an important nature system along the Potenza River, enhanced by the River Park, where one can entertain oneself with recreational and sports activities. Close […] 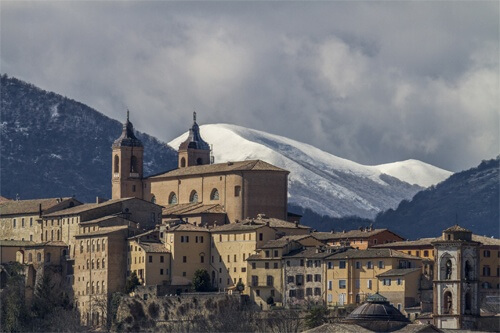 Camerino: Wonder to discover Camerino (m. 670 s.l.m.) stands on a hill between the valleys of Chienti and Potenza, closed to the south by the Sibillini Mountains and to the north by Mt. San Vicino, in a landscape that flows from farmland to verdant woods and oaks. Originally an Umbrian settlement, it became a municipium […]

Castrum Cerreti Cerreto d’Esi is a village situated between the slopes of Mt. San Vicino and the Esino River. The historic nucleus is delimited by original walls. The village has a layout that has remained unchanged over the centuries, it is characterized by a system of orthogonal axes similar to the Roman castra. Today it […]